Sundarbans- A Wonderland of Mangroves 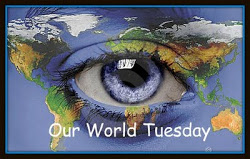 A happy New Year to you!
We spent the last days of 2016 in Sundarbans, an incredible ecological haven for mangrove trees and aquatic animals.  The river Ganga (Ganges) branches into many distributaries before it reaches the ocean, making a vast area of swamps. The tides make the water salty. There are different kinds of mangrove trees in the forests which line the river. 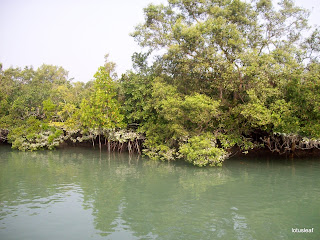 We were on a boat cruising the streams for three days. It was chilly, but we enjoyed the cruise.The boat stopped at some villages, where we went ashore and visited museums. The folk drama  at one place about the saintly Bono Bibi who helps those in trouble , was poignant. 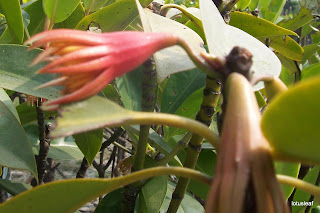 Although we could not catch a glimpse of the feared Royal Bengal Tiger, we came across large crocodiles sunning themselves, wild boar , monitor lizards and spotted deer.
The flower above is the flower of the Bruguiera mangrove. In one village I saw a number of these red flowers fallen on the ground and some were moving! On close inspection, I found that the moving ' flowers' were in fact red crabs camouflaged to look like the flowers, making it easy for them to catch their prey, and also helping them escape from the birds!
Posted by lotusleaf at 7:23 AM