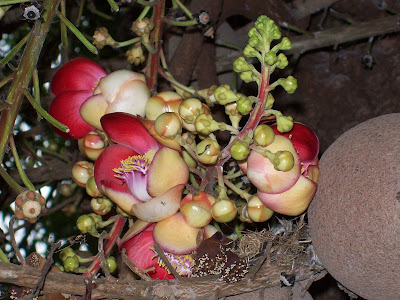 Today is the Full Moon Day of the Indian month of Vaishakha, the day Siddhartha Gautama, the Buddha was born 2600 years ago. I am posting some trees which have associations with the Buddha.
The Cannonball Tree Couroupita guianensis, is a native of India as well as the tropical South America. It is called Nagalinga Pushpa in Kannada, which describes the flower which has a hood like the cobra Naga, and a short stigma resemling a Lingam in the centre. The flowers have two kinds of pollen, fertile pollen in the ring stamen, and sterile pollen in the hood stamen. The flower does not have nectar. So, to attract the pollinators, it has a strong perfume. 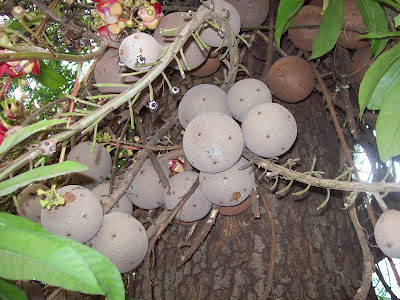 The tree gets its name 'Cannonball Tree', from the hard, round fruits which resemble cannonballs. 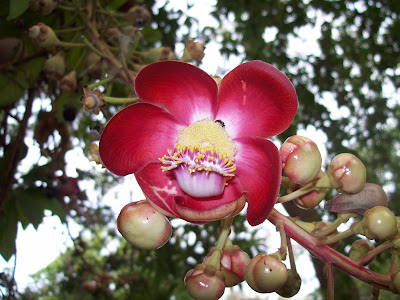 People of Thailand erroneously call this tree 'Shorea robusta'. Sal is the tree under which the Buddha gave his last sermon and drew his last breath. 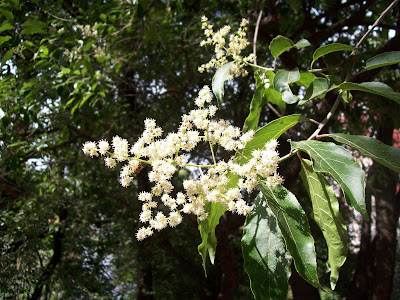 The real Sal Tree Shorea robusta is flowering now throughout India. The wood from this tree is used for building houses and making furniture. 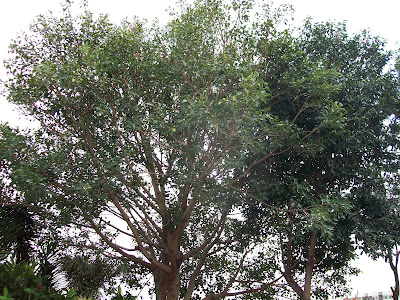 The Bodhi Tree Ficus religiosa is the tree under which Siddhartha Gautama had enlightenment and became the Buddha. This tree has no flowers.
Villages all over India have this tree growing in the centre. Meetings are held and disputes are settled under the Bodhi tree.
All the three trees are sacred to the Buddhists and the Hindus .

Posted by lotusleaf at 5:54 AM