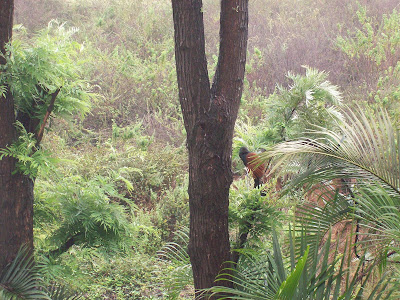 The Crow Pheasant Centropus sinensis is a regular visitor to my garden. A couple lives in the Forest Department's nursery nearby and start their calls early in the morning. Yesterday was an unusually cold day with the mercury at 17C, and the bird seemed to be feeling the cold too. 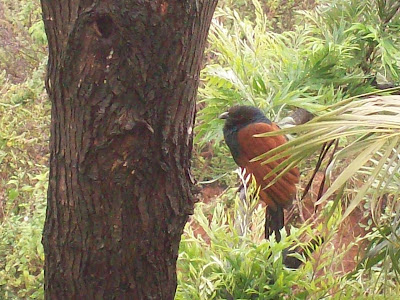 Crow Pheasant which belongs to the Cuckoo family, is also known as Coucal. It is called Kembootha in Kannada, which means 'Red Devil'. The name must be because of its red eyes and the brick red wings.It is a clumsy bird and a weak flier, so there are many jokes about it. Clumsy people are often compared to the Kembootha, But it is far from clumsy in catching snakes. I have seen it catch a snake from a spot in my garden where I was working minutes earlier.
The couple which visit my garden synchronise their calls so that the garden seems to be resonating with their calls. They also make hissing sounds and harsh croaks when they come across crows or cats.
The nest of the Coucal is an untidy construction of twigs. There is a story that it uses the fabled Sanjeevini herb to constuct its nest. Sanjeevini herb is supposed to bring back people at death's doors to life.The Red Devil is always in danger of being robbed of his home.
Posted by lotusleaf at 5:55 AM