Weekend Reflections- The Singer in the Night 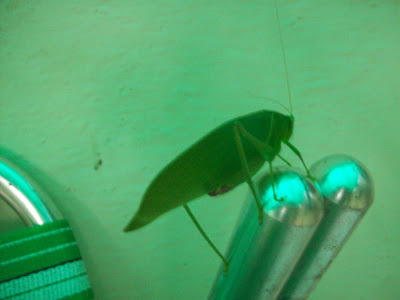 I finally discovered who sang every night in a monotonous shrill voice. The culprit was sitting on my folded garden chair in the veranda, trying hard to look like a leaf. His long antennae gave him away. 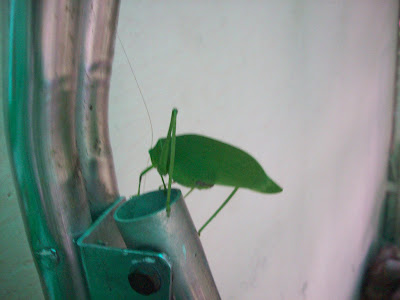 The Katydid is related to the grasshoppers and the crickets. Commonly found in the tropics, it gets its name from its repitative call which sounds like "Katydid katydidn't". But my visitor's call sounds more like "tizi tizi"! The sound is produced both by males and females by stridulation- rubbing the forewings together. Their wings are good for producing piercing sound, but not for flying long distances.
According to some scientific studies conducted in 2010, the Katydid PLabycleis affinis has the largest testes in proportion to body mass of any animal recorded!
My thanks to James at Weekend Reflections.
Posted by lotusleaf at 6:06 AM