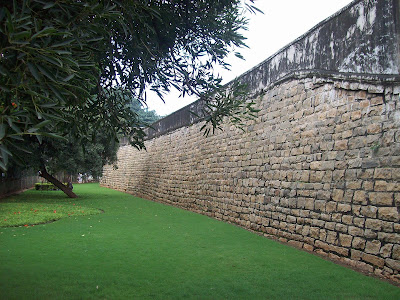 The Bangalore Fort is a historic structure built by the 16th century chieftain Kempegowda. Legend has it that when he was building it, the main door could not stand , and collapsed many times. The astrologers he consulted said that the only way to make it stand was to sacrifice a pregnant woman. Horrified, Kempegowda rejected the suggestion. His pregnant young daughter-in -law, who heard the astrologers' words, went to the place and committed suicide as a sacrifice to make the door strong. 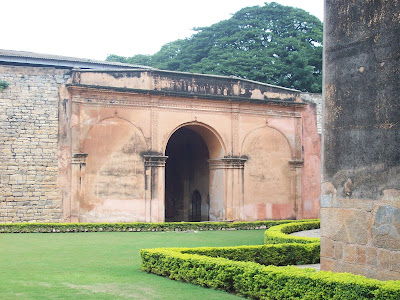 Hundred years later, the fort was strengthened and fortified by Tipu Sultan , who was the terror of theBritish East India Company, which was gaining power in India. The fort has beautiful archways, and carvings in the Islamic style. 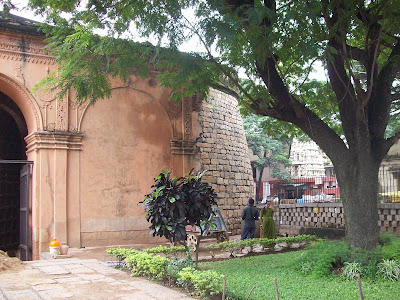 The East India Company sacked the fort in 1791 under General Cornwallis, and thus captured Bangalore.
Now, only a small portion of the fort is remaining, and Bangalore city has grown all around it. The Fort area still has an old world charm , with the busy Krishnarajendra Market nearby, where everything can be bargained.
To see interesting places from around the world, click on My World Tuesday at http://showyourworld.blogspot.com/

Posted by lotusleaf at 6:14 AM