The Fairest of All 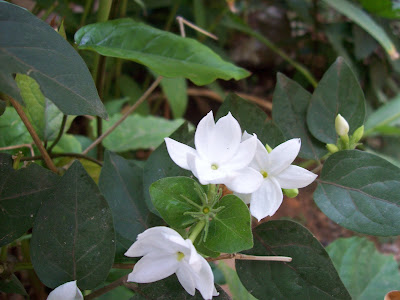 There are many types of jasmine, but the Kunda is the only one without fragrance. But it has extraordinary beauty and whiteness to make up for its lack of fragrance. The Kunda is the comparison of whiteness in Indian literature. "As white as the Kunda", not "as white as snow", in a land where snow is never seen.
Another point in the Kunda's favour is that it flowers throughout the year, and in profusion. Unfortunately, my Kunda plant is not so prolific this year for some unknown reason. It is called Kakda in Kannada, the local language.
Mid March is the time when the Exam fever is on .Students , parents and teachers visit the temple of Saraswati , the goddess of Knowledge now. Saraswati is considered by the Hindus and the Buddhists to represent Intelligence, Cosmic Knowledge, Creativity, Education, Music and the Arts. She is described to be 'as white as the Kunda'. People offer the Kunda jasmine in her temple. 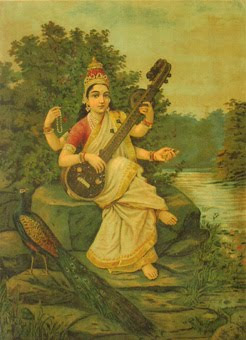 This 19th century painting of Saraswati is by Raja Ravi Varma, a Prince of an Indian state. Here the goddess is shown to be playing the Veena, a favourite musical instrument of India.
May Saraswati shine the intelligence of all the students!

Posted by lotusleaf at 5:46 AM