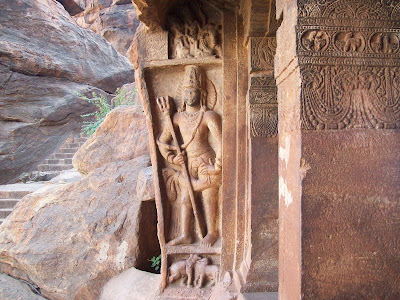 One of the historic places I visited last weekend was Badami, founded in 540 A.D by the Chalukya king Pulakesi.Cave temples hewn out of huge red sandstone rocks are very beautiful. This stone warrior guards one of the caves. 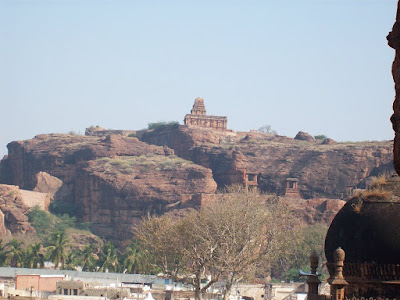 According to legend, two demons named Vatapi and Ilwala lived in these hills . Whenever they saw a traveller, vatapi would turn himself into a goat. Ilwala woujld kill the goat and feed the hungry traveller goat- meat curry. After the traveller finished eating, Ilwala would call out, "Vatapi, come out" , and Vatapi would burst forth from the hapless traveller's stomach. The demons would then feast on the traveller. They tried this trick on the sage Agasthya one day, but the sage was quicker than them. As soon as he finished eating, he said, "Vatpi, get digested!" and the demon was digested . The two hills nearby are believed to be the demons' remains. 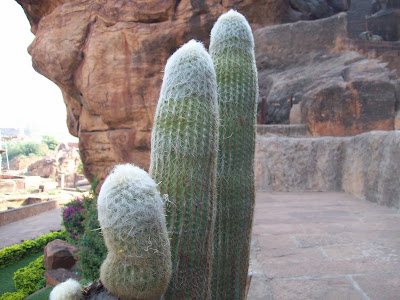 The Old Man Cactus Cephalocereus senilis does not look out of place in front of the ancient temple. Its long white hairs protect it from the sun. 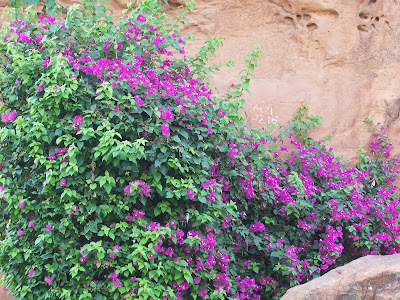 The deep puple bougainvillea has gone out of fashion in the cities, but looks enchanting here. 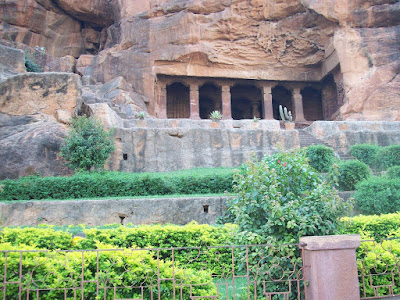 The first cave hewn out of red sandstone houses the Hindu gods and goddesses, while other caves have Jain and Buddhist motifs.

Posted by lotusleaf at 6:21 AM